Fire: Bring on the Inferno

Imagine the forest and hills near Wenatchee 200 years ago, a stormy night in late August. The air is hot and stuffy. Dry lightning flashes in the night. A bolt shoots out and strikes the mountain. Flames appear. They spread. No rain to stop them. A wildfire is born. 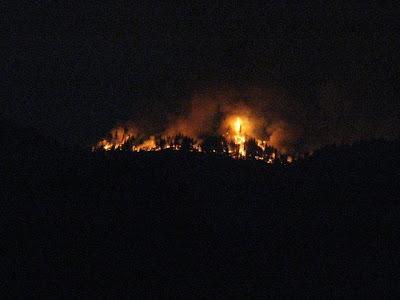 With no controls this fire could burn for weeks or even months. Until the rain fell or it burned itself out. But this fire wasn't a raging wall razing the forest in its path. This fire burned through the brush and small trees. Clearing the forest floor, and occasionally burning tree stands. Just like it had 10 or 20 years before. Just like it would 10 or 20 years later. The cycle would keep repeating.

Except the cycle stopped. People showed up and they didn't like the fire. They feared for their lives and their livelihoods. Fire was evil. It had to be controlled. So they prepared for fires. They built fire lookouts. They watched the storms and rushed to extinguish any flames. They would control the fire.

For a time it worked. They stopped the fires. The forest grew. And grew. They harvested timber and the forest came back thicker than before. And they continued to stop the fires. But fire would not be denied. The forests were thick, but they were not teeming. Dead brush and branches littered the floor. Trees stood shoulder to shoulder where they had once stood apart.

Finally the trees grew too numerous. The underbrush too thick. Fire started and it raged. It burned. It devoured the landscape. The people had to fight so hard to contain it. And they did stop it.

But where the fire had gone nothing remained. Fires before had left tall, healthy trees relatively unscathed. Now there was nothing. The ground was dead. The trees were dead. Each trunk like a gravestone. The damage remains. It will be decades before these forests will be whole again.


Each new fire that crosses the land leaves a similar testament to our misunderstanding of the flames. A black wasteland. For years we assumed that fire was bad. How could something that burns the land be good for it? Fire is both destroyer and life giver. Fire often destroys what is there, but in return it allows new life to sprout from its ashes. The diversity of plants after a fire is astounding. There's no competition. The ground is open, free to whichever plant can get their seeds down first.

Several species require fire to propagate. Their seeds only released after a fire rushes over the landscape. Releasing their seeds from cones and other casings. Other species require fire to help them survive. Ponderosa pine grows best in open sunny locations. Its bark is thick and fire resistant, and its branches are far above the ground. It is suited to a landscape that receives fire. Without fire, other tree species can often out compete Ponderosa in its native habitat.

Fire should be embraced. Or at the very least accepted. Fire has always been here. Fire is much like a surgeon cutting out dead tissue and allowing new, healthy tissue to grow back in its place. The landscape is healthier with fire.

I'm not saying that fire should be allowed to burn and to just forget about the people. But there is a better line to walk. Strict fire suppression only leads to larger and more dangerous fires. Controlled burns are a good start. These can somewhat replicate a natural fire. It would be ideal to allow the fires to take back control, and burn what they've always burned. However, this isn't really a valid option anymore. The consequences are too severe.

Fire is not the enemy. Fire burns, but it also allows new growth. Growth that would never have occurred without a blank, blackened slate. Fire is as much a part of our landscape as the trees we are trying to protect. Accept it.